The Heart of the Brain (7T MRI, T2 TSE, Brain) T2-weighted images of the brain presented with custom colourmaps highlighting the contours of the cortex

Midbrain Flowers (7T Multi-Echo GRE MRI of the human Midbrain) This image is created from a single axial slice at 0.3 mm in-plane resolution through the human midbrain at approximately the level of the substantial nigra and periaqueductal gray matter. The image is a root sum of squares combination of four echo times, and is tiled in multiple colourmaps. 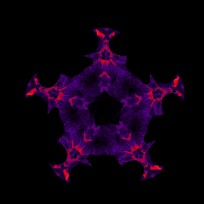 Moments and Movement (7T MRI, T2 TSE, Cerebellum, Coronal Oblique) Coordination is finding the right moments for your movement. This image of the cerebellum has been rotated and repeated in GIMP

These images were compiled into a calendar to showcase the neuroimaging power of the 7T MRI. In addition the the images shown above, the calendar features work by Alan Seifert, Rafael O’Halloran, and Fran Padormo. Some of the images in this calendar overlap with the Translational and Molecular Imaging Institute Calendar, because I produce both of them. This year the tone of the calendar was set by the image submitted by Rafael, he did an awesome pen and ink drawing  that you can see if you click on the Shutterfly link above and it inspired me to take a lighter tone in the rest of my images.